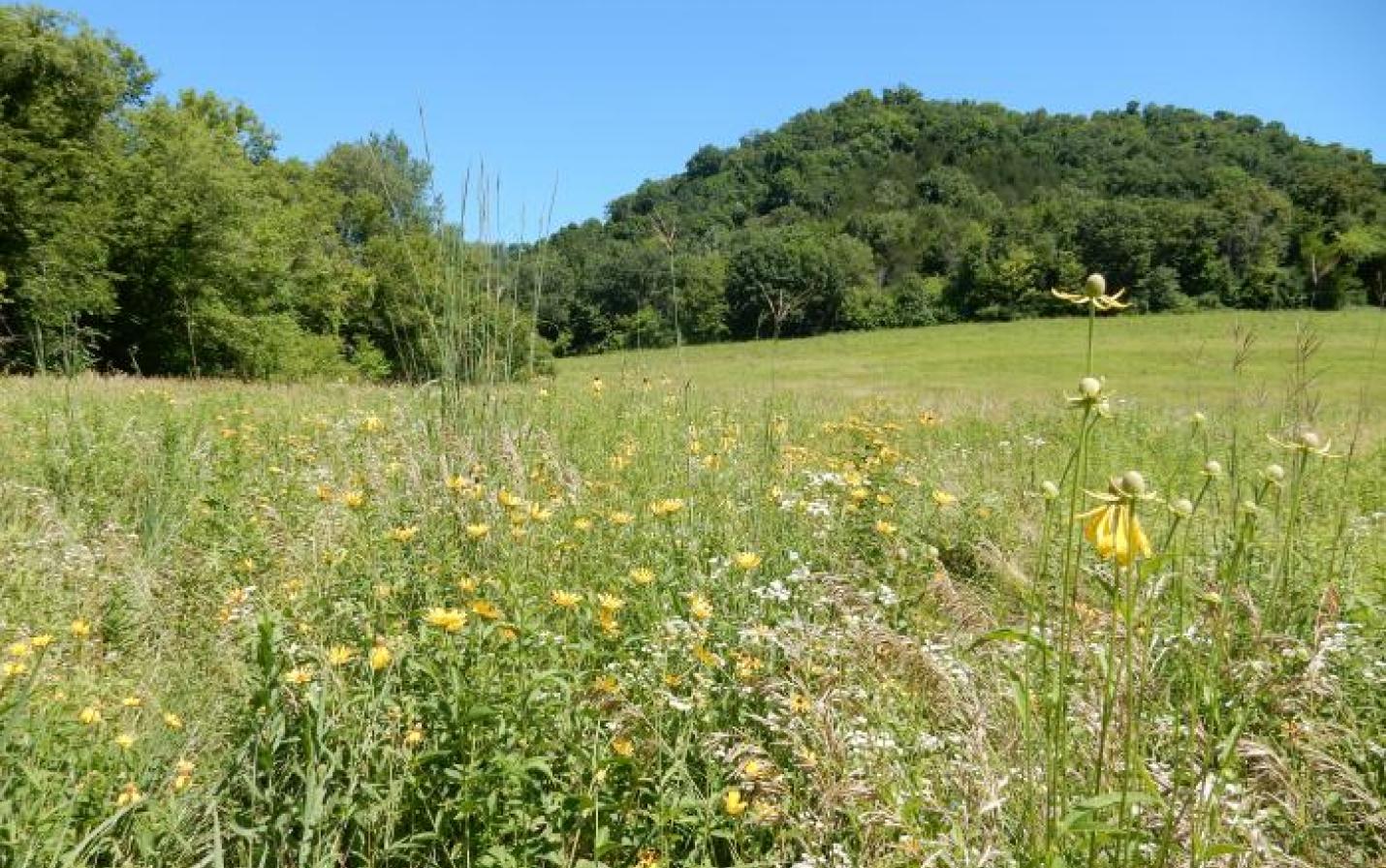 GENOA, WI – Steep, wooded bluffs enfold broad, sloping pastures for sheep and horses where Gene Amsrud and Patty (McNamee) Amsrud shared the view with a visitor to their land recently. Days before, they had permanently protected their 150-acre land near the Mississippi River near Genoa from development by signing a conservation agreement with Mississippi Valley Conservancy.

Patty pointed to a monarch butterfly bobbing among the flowers on a pollinator-friendly planting of native grasses and flowers. She listed some of them after identifying the stiff goldenrod nearby: cream gentian, purple prairie clover, fringed gentian, gray-headed coneflower and cup plant. Grasses include big bluestem and there is an abundance of native sunflowers and milkweeds.

The Amsruds have owned the land for some 30 years, buying a 50-acre farm after they were captivated by the beauty of the valley and bluffs when they returned to the La Crosse area where they grew up, Gene said. They added the rest of the land in two purchases of neighboring properties in subsequent years. Gene, a Navy veteran, retired after working for 20 years for the USGS Upper Midwest Environmental Science Center in maintenance. Patty worked for 23 years for the La Crosse Veterinary Clinic. In their spare time, they tended a small flock of Clun Forest sheep and a few horses. For a few years, they raised a small plot of tobacco, taking advantage of an allotment and tobacco shed that came with the farm. Now everybody on the farm, including the ewes and the horses, is retired, according to Patty.

When they bought the farm and run-down house, they expected to fix it up before retirement. "But we're still at it," Patty said with a laugh.

“Five houses have been built on this dead end road since we moved here. We didn't want any more houses; that's why we're in the conservancy," she said. Without the conservation agreement, the land would probably turn to housing in the future, because "you can't make a living farming on it," Gene said.

Gene said it has been interesting to watch the growth in the turkey population over the years. They sometimes have as many as 50 to 75 in the yard, he said. Deer population is also up, he added.

Other wildlife they host on the farm include owls -- barred, screech, and great horned -- "other calls in the night" they haven't identified and the haunting call of the whippoorwill. A bobcat was spotted on a local trail cam, and a neighbor has seen a bear.

A dry stream bed through the property was overgrown so that "we didn't even know it was there" when they bought the land. But in the last few years, "it has turned into a raging river" during the intense rains, Patty said. They noted the stream bed is now rocky and has been carved out deeply. Runoff from the most recent storm cut deeply into a lane at the edge of a pasture. Their land is in permanent cover, either forest, pasture or hayfield. And the land use above them hasn't changed, so they attribute the change in runoff to the more intense storms associated with climate change. The land is in the Coon Creek Watershed.

Abbie Church, the Conservancy conservation director, said that "the Amsrud property is exceptionally diverse, with large, mature open-grown oak including white, bur, and red oak and shagbark hickory throughout." Such oak woodland is now considered critically imperiled in Wisconsin (according to the State Wildlife Action Plan) due to the lack of adequate oak regeneration, Church added. By contrast, the Amsrud Property has not only retained mature oak seed trees but has oak regeneration occurring within the understory. Reconstructed prairie on the property is an important habitat for area pollinators, and is full of butterflies, bees, and other wildlife, she added.  State-listed species, along with the whippoorwill, on the property include little brown bat, bullsnake, black ratsnake, and the Kentucky coffee-tree.

In a pasture recently mowed, the couple pointed out a tiny patch of vegetation Gene had mowed around. Within the patch is a single plant of butterfly weed, its showy orange flowers favored by bees and butterflies. Patty said that she has had a lifelong hobby of identifying flowering plants. This was the only place on the property where she had found the butterfly weed. "Don't mow down the butterfly weed," Gene said, repeating what she says when he goes out with the tractor and mower.

The conservation agreement, called an easement, means that the land cannot be mined, developed for housing, or otherwise disturbed -- a legal guarantee that subsequent owners must honor, guaranteeing that the land will be available for its scenic values, for its importance in slowing runoff, and its habitat for wildlife, including, as long as Gene is careful, a much admired butterfly weed.