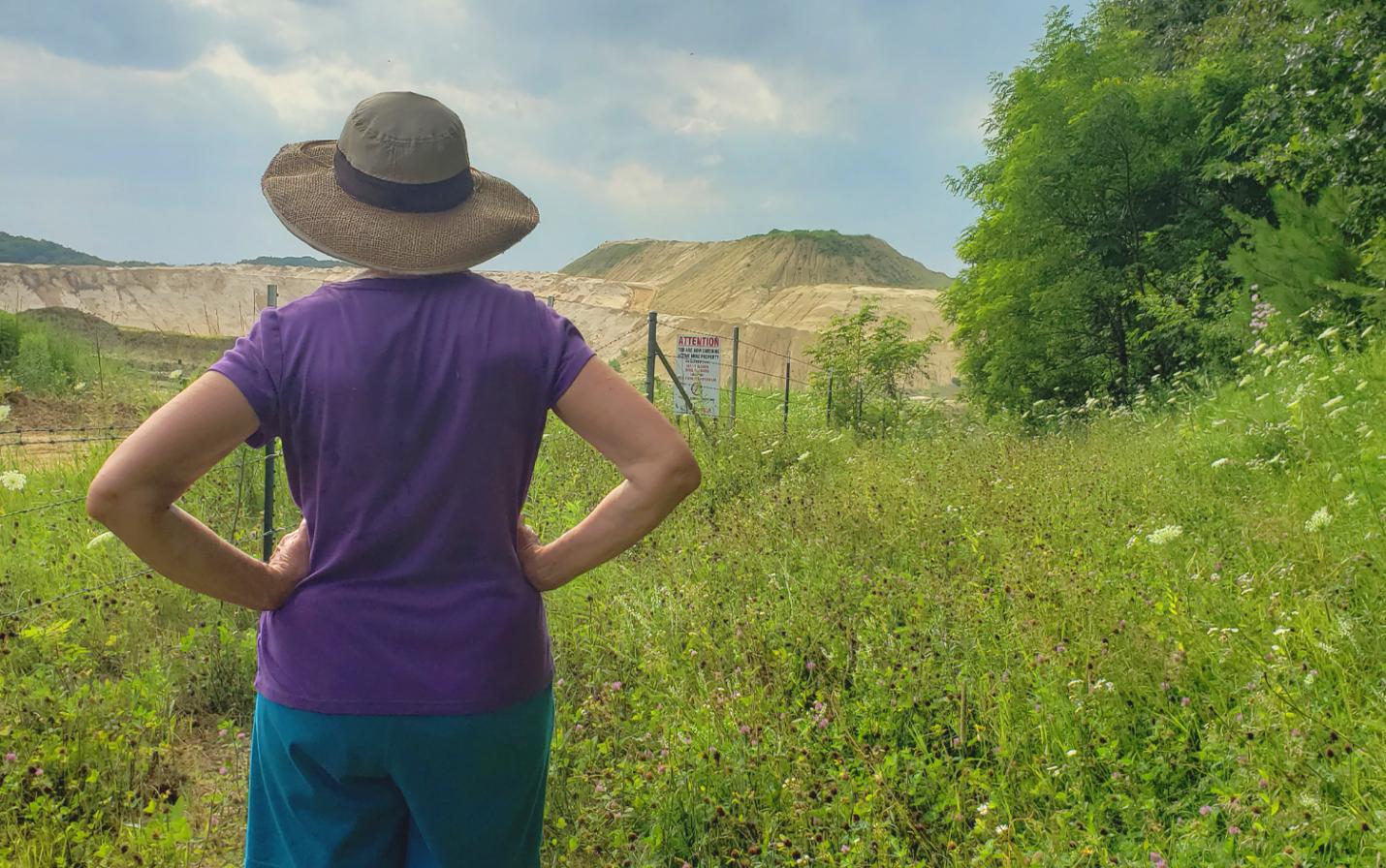 Peg Brenneke, a Monroe County native, resisted selling her grandfather’s farm to a sand mine company when everyone around her succumbed to the pressure.  Now, Mississippi Valley Conservancy and Peg have ensured that the 111-acres will remain unscathed. If she had sold, land that her grandfather dedicated his life to could have been lost to mineral extraction. Peg is upholding her grandfather’s legacy of restoring the land from all the previous erosion damage. “I’m doing this in memory of my grandparents,” she said.

The Covia Corporation (formerly Unimin) sand mine in Monroe County is mostly silent these days. Prior to 2016, the demand for high quality sand used in the extraction of natural gas and petroleum caused a boom in Wisconsin, a state that provides over half of the high-quality sand in the United States. Peg recalls all too well the sounds of heavy machinery and semi-trucks rumbling all hours of the day and night. In its wake is a massive pit in the ground, hundreds of feet deep. “The transition from Peg’s land to the mine is emotionally jarring. You emerge from Peg’s forest and just beyond her fence is absolute desolation with no living plants or animals,” said Zac Millbrand, Stewardship Coordinator at Mississippi Valley Conservancy. A fence and a couple dozen feet of grass are all that separate this lifeless landscape from the Brenneke land, which now stands as an island of wildlife habitat. Thanks to the agreement with the Conservancy, Peg can rest assured that the family farm will remain intact for future generations no matter how much the price of frac sand rises.

Peg’s grandparents, Bertha and Tony Scholze, purchased the property in 1942 when their previous farm was claimed under eminent domain as part of the development of the North Impact Area of Fort McCoy. The Brenneke’s new land bore scars from previous owners’ farming practices, and the property had deep eroded gullies and ravines. The land was so degraded, Peg says, that the neighbors couldn’t believe Tony would buy it. By implementing better land husbandry techniques such as establishing sediment basins to slow runoff, planting trees, contour planting, and crop rotation the family transformed the land into a sustainable farm with abundant wildlife habitat. Today, the springs, ponds, forest, and prairie offer refuge in a community that underwent significant development and fragmentation since the demand for high-quality fracking sand rose enough to pressure Peg’s former neighbors to sell.

The Conservancy board was moved by Peg’s strength to resist selling her family land when all her neighbors gave in to the pressure. "It takes a special kind of person to turn away from a quick payday because it violates your principles,” commented Rob Tyser, the Conservancy’s Board President. Another factor in approving the project was the proximity to the natural resources habitat at Fort McCoy, which is home to a diverse population of species, including federally and state-listed endangered and threatened species. Land such as Peg’s serves as an important pathway for wildlife to travel safely through. Armund Bartz, Wisconsin DNR Driftless Area Ecologist, said, “As time passes, biologists are realizing the importance of not only protecting blocks of wildlife habitat, but also the corridors that connect them.”

Despite the habitat destruction next door, Peg Brenneke’s land acts as a wildlife habitat refuge with bobcats, bear, and white-tailed deer being frequent guests. With a permanent conservation easement, the land will help support these species, and more, for future generations to experience.

Founded in 1997, Mississippi Valley Conservancy is a nationally accredited regional land trust that has permanently protected nearly 21,000 acres of scenic lands in southwestern Wisconsin by working with private landowners, businesses and local communities on voluntary conservation projects. The focus of the Conservancy is to conserve the bluffs, forests, prairies, wetlands, streams and farms that enrich our communities, for the health and well-being of current and future generations. For more information, visit www.mississippivalleyconservancy.org.