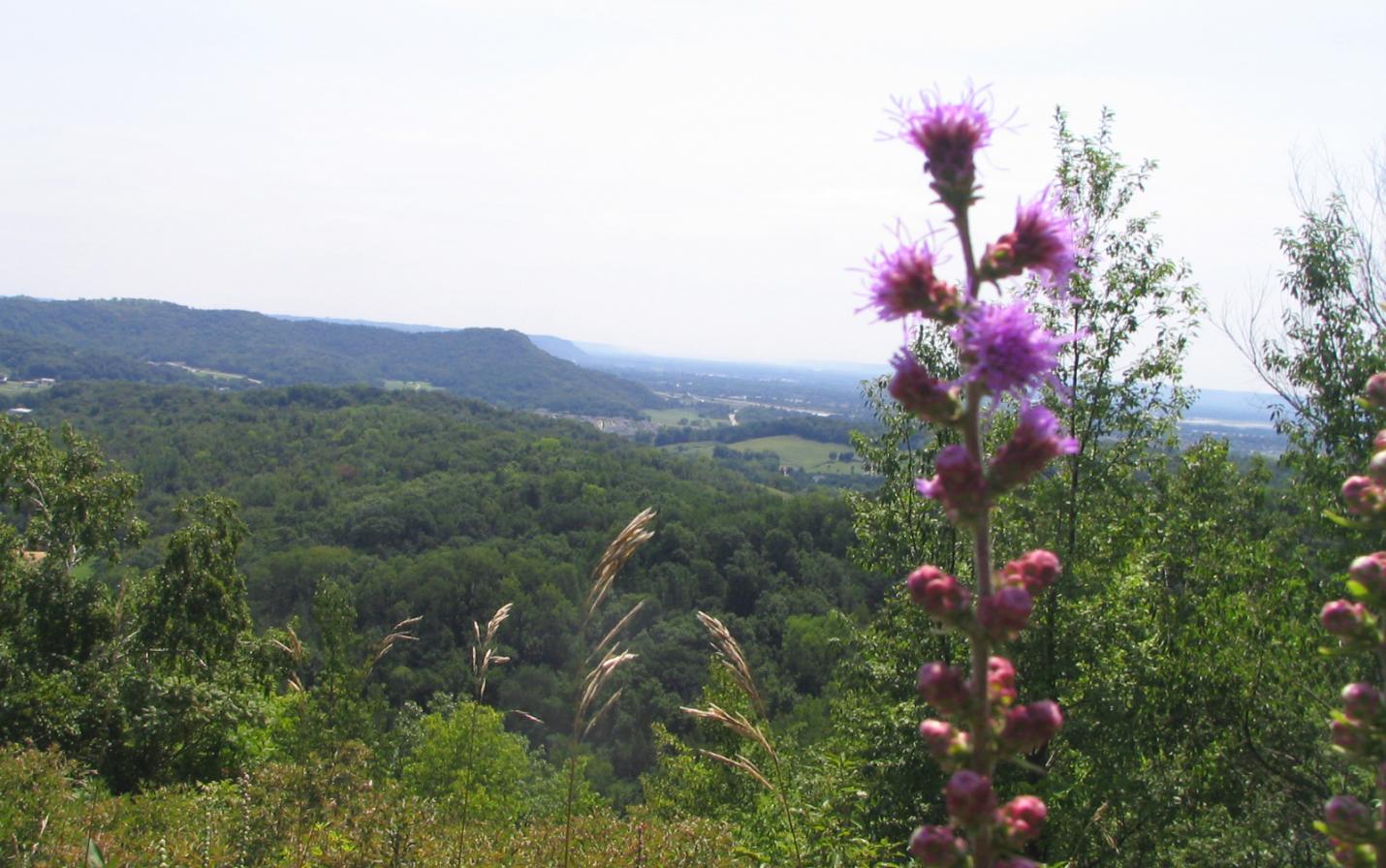 Cub Scout pack leader Bob Tenwinkel heard about a possible site for the home he was hoping to build during a Cub Scout picnic he attended with his sons in Holmen in 2018. One of the other dads who knew he was looking for a place said he knew of a fellow who knows a fellow looking to sell about 250 acres of woods and bluff top between Onalaska and Holmen.

And soon, in September 2018, Tenwinkel and his wife, Erin Donlin, with their love of trees and wildlife, became the third owners of a property protected from development by conservation easements with Mississippi Valley Conservancy.

In 2009, George and Sharon Kerckhove conveyed an easement on 200 acres they owned to the Conservancy to protect the land and habitat from encroaching development. In 2011, Heather and Charles Nolte, purchased the Kerckhove property and subsequently purchased an additional 40 adjoining acres. In 2013, the Nolte’s decided they wanted to protect the additional 40 acres, and they placed the adjoining 40 acres under a separate conservation easement with the Conservancy. “We believe in the preservation of natural resources for future generations,” previous owner, Heather Nolte said in 2013 when their easement was conveyed. In September of 2018, Bob Tenwinkel and Erin Donlin purchased both the Kerckhove and Nolte tracts from the Nolte’s and became a part of the history of these lands that are protected forever.

Tenwinkel said in an interview that having easements on the properties was not a deterrent to the purchase. Erin agreed that their use of the land wouldn't be any different with or without the easements.

They learned all about the restrictions on the use of the property in easements in the first meeting with the realtors. The realtor provided the documents and the "previous owner spoke very highly of the Conservancy," Tenwinkel said.

An electrical engineer, Bob has worked for most of his career with Boeing, mainly on the systems design for the 747. They moved here from Seattle so they could return to the Midwest where their roots are; Bob grew up on a farm near Burlington, Wis., and Erin grew up in Miller, S.D., an agricultural community of about 1,500 population in the east central part of the state. Erin found a job here as an audiologist for CESA 4. Bob decided to retire.

Soon after the purchase, Abbie Church, the Conservancy’s conservation director, walked the property with Tenwinkel. He was delighted to learn about the river birch she pointed out while identifying species of vegetation and wildlife during the hike. He was not familiar with the tree although he is a big fan of trees; he used to transport acorns and walnut and hickory nuts from his home place to Seattle, start the seedlings and plant them on his property there.

“We were delighted to learn about the many species of vegetation and wildlife on the property during the hike with Abbie,” said Tenwinkel. “It’s also been great to learn more through the annual monitoring process with other Conservancy staff, especially as I’ve taken on the challenge of eliminating invasive plant species on the property.”

The property, located in the Town of Onalaska, came with a large, Amish-built log cabin and garage, which have since been relocated off the property to make a room for a new home. Tenwinkel said he appreciated that the process of ensuring the construction of their new home would fit within the parameters of the easement terms was a smooth one.

Changes to easements are seldom permitted; they can only be made if conservation value is the same or increased. Church noted, "The original easement was very specific about allowing for future building construction for a cabin, residence and outbuildings. His request was to have only two buildings with the allowed cumulative footprint. We determined that this fit with the intent and purpose of the conservation easement, since it was all still within the parameters of the allowed building footprint and within the building zone identified in the easement."

Bob and Erin said they are looking forward to raising their boys, Matthew, 9, and Andrew, 7, here. The boys have already picked out where they want to build their forts, and Bob said he would be interested in protecting additional land nearby should it become available in the future.

We’re heartened to see this family take the conservation torch and run with it!