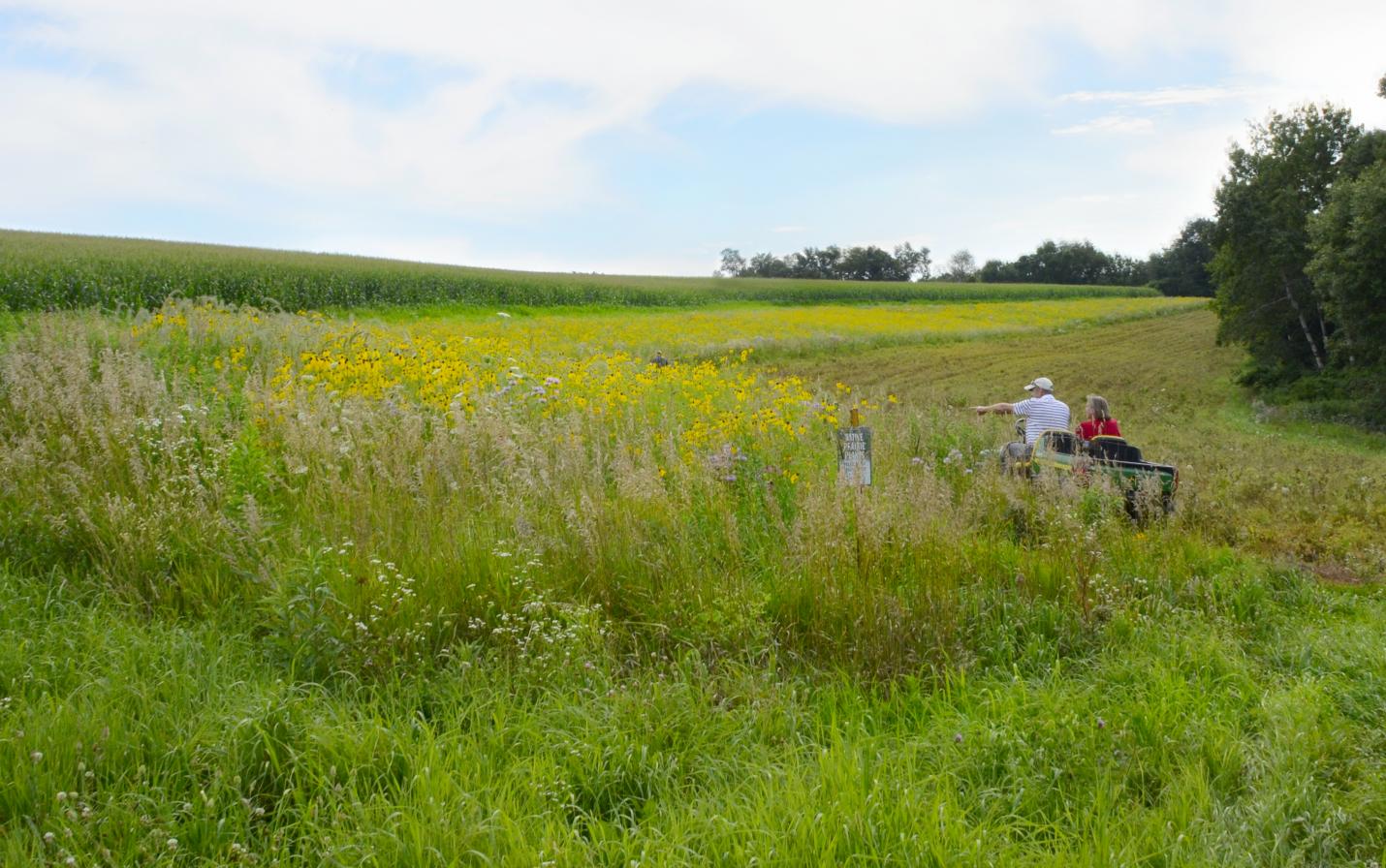 Forty-three years ago, David and Betty Van Dyke passed through Wisconsin’s Driftless Area while visiting David’s sister in La Crescent. Both were so struck by the uniqueness and beauty of the area that soon after they made it their home. They purchased a 114-acre farm within the Bad Axe River watershed, 7 miles southwest of Viroqua. David farmed the land for 20 years while working in Viroqua as a private practice psychiatrist. Betty worked as dietitian at Vernon Memorial Hospital for before becoming a full-time grandmother.

David meets my husband Joe and me in their beautiful farm yard on a hot July afternoon. We are immediately introduced to family dogs Doodle and Sweetie who companion us throughout the afternoon. David provides all-terrain vehicles for Joe, photographer Tom Rhorer, and myself. The four of us—dogs in tow—head down the farm road, lush corn fields on each side, and an escort of hundreds of swallowtail butterflies playfully dancing round us. We are about to see our first prairie strip. 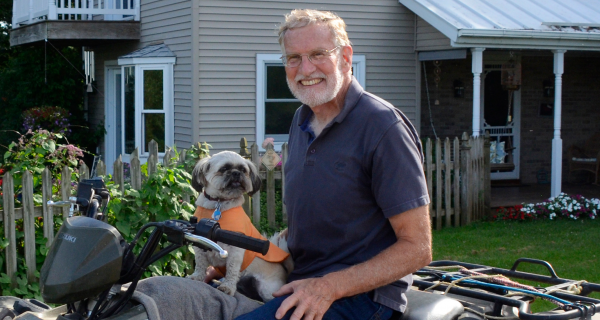 David Van Dyke and a field assistant prepare to inspect their croplands that contain prairie strips to provide biodiversity and erosion control for greater resilience to a wide variety of climatic events, including heavy rainfall, flooding, and drought.

Not only did David and Betty raise their family as active members of the Viroqua community, throughout the years they have offered thoughtful, ecologically responsible stewardship to the land that they love. One part of this stewardship that the Van Dykes have implemented on their property are prairie strips. Through various sources David learned that diverse native prairie vegetation is one of the most beneficial communities for the environment – building the resiliency of the land. After reading more, including research published through Iowa State University, David and Betty decided to install prairie strips on a small patch of their land. This was four years ago, and the results speak for themselves.

Prairie strips are a conservation practice that uses strategically placed native prairie plantings in crop fields. The practice was developed and tested by the STRIPS (Science-based Trials of Rowcrops Integrated with Prairies Strips) team at the Neal Smith National Wildlife Refuge in Iowa. According to the work done through the Iowa State STRIPS program, prairie strips deliver enormous soil, water, and nutrient benefits while increasing wildlife habitat. The strips, a mix of native grasses and flowers, are generally planted around or through a field, alongside a waterway, or in a terrace channel. One way prairie strips improve the resilience of the land is by reducing soil erosion. The deep roots and stiff, upright stems of native prairie plants slow surface runoff and hold soil in place. Even small patches of prairie provide diversity and erosion control that offer greater resilience to a wide variety of climatic events, including heavy rainfall, flooding, and drought.

David calls the first piece that we see a prairie patch, not a strip. Prairie strips are generally 30 to 120 feet wide This patch of land was his first experiment, which he started 4 years ago by cutting the area and applying herbicide. After keeping all vegetation off the patch during the summer, he seeded in the fall with a prairie seed mix that he purchased from Prairie Moon Nursery in Winona. He waited several years, cutting any growth on the patch to 8 inches. This gave seedlings the sun they needed to grow by preventing the growth of invasive species. After two years of “not much happening,” according to David, the third year saw some actual prairie. And by year four, the prairie had come alive.

We observe the prairie patch, vibrant with color and movement, listening as David shares a story. That past year he noticed that there were no bees pollinating a nearby apple tree, which was worrying. He felt certain that there would be no apple crop—pollination is a vital part of the apple-making process. Imagine David’s surprise one evening when he found the apple tree full of moths. That fall there was a crop of apples after all. David was certain these moths came from the prairie patch and pollinated the apple tree.

We board our vehicles and head to our next destination, dogs and butterfly escorts in tow. We travel up the road a bit and then down a corn-stalk-lined path. At the end of the corn rows, the path opens up into a beautiful acre and a half of prairie strip, alive with movement and color. There were multiple varieties of flowers, grasses, butterflies, birds, and bees. This strip is 3 years old. David says that each year he has seen new species of prairie plants emerge. Last year there were black-eyed Susans everywhere. This year there are different colors of coneflowers, and the native grasses are starting to show up. David points out the small lead plants at our feet. “They really hold the soil,” he says, “The prairie is different every year.” Canada rye, little bluestem, big bluestem, partridge pea, bee balm, vervain, coneflowers, asters, and milkweeds are just some of the plants that we see in the strip. Prairie strips also attract a number of bird  species – David has two pairs of bluebirds nesting in this strip. His goal is to attract some meadowlarks and bobolinks.

The third strip that we visit is in its first season. David will cut this strip several times throughout the summer to eliminate the weeds and let the sun reach the new prairie seedlings. But already we could see many varieties of prairie plants. In addition to this one, the Van Dykes have one other strip that is new this year. David points out several times during our time together that, “It doesn’t take a huge piece to make a difference. But you’ve got to have variety.” David notes that the strip along the edge of the field—close to the forest—generally attracts more deer than the nearby crops. “They just seem to like the prairie better than the alfalfa,” he says.

Three years ago, the Van Dykes began working with Valley Stewardship Network. VSN provided the prairie seed mix through a grant. It costs about $1000 for an acre of quality native prairie seed. The Van Dyke farm serves as a site for VSN’s On-Farm Stewardship Research Project which studies their contribution to soil protection and quality, water infiltration, and bird/pollinator habitat. David has also been working hard to remove all invasive species from the land. His goal is no weeds, “I would like to see it the way it was 20 years ago when I was farming the land.”

Betty joins us back in the house with glasses of water. Maintaining an acceptable social distance, we talk more about the 43 years the Van Dykes have spent on this property. Betty rolls her eyes when we began to talk about invasive species removal. “Garlic mustard,” she says, “He is obsessed.”

The Van Dykes are pursuing an easement with Mississippi Valley Conservancy to ensure the wildlife and habitat of their property, and their farming legacy, will remain beyond their lifetime.

As we leave the property, I am struck by the gentle hospitality that we received from David and Betty throughout our visit. That hospitality was mirrored by their love and care for the land. In a way, it’s the same hospitality they offer to future generations as they plan to protect their land into the future.

Above, Barb and Joe Kruse follow David Van Dyke on a tour of the prairie strips he's developed on his cropland with the support of Valley Stewardship Network.