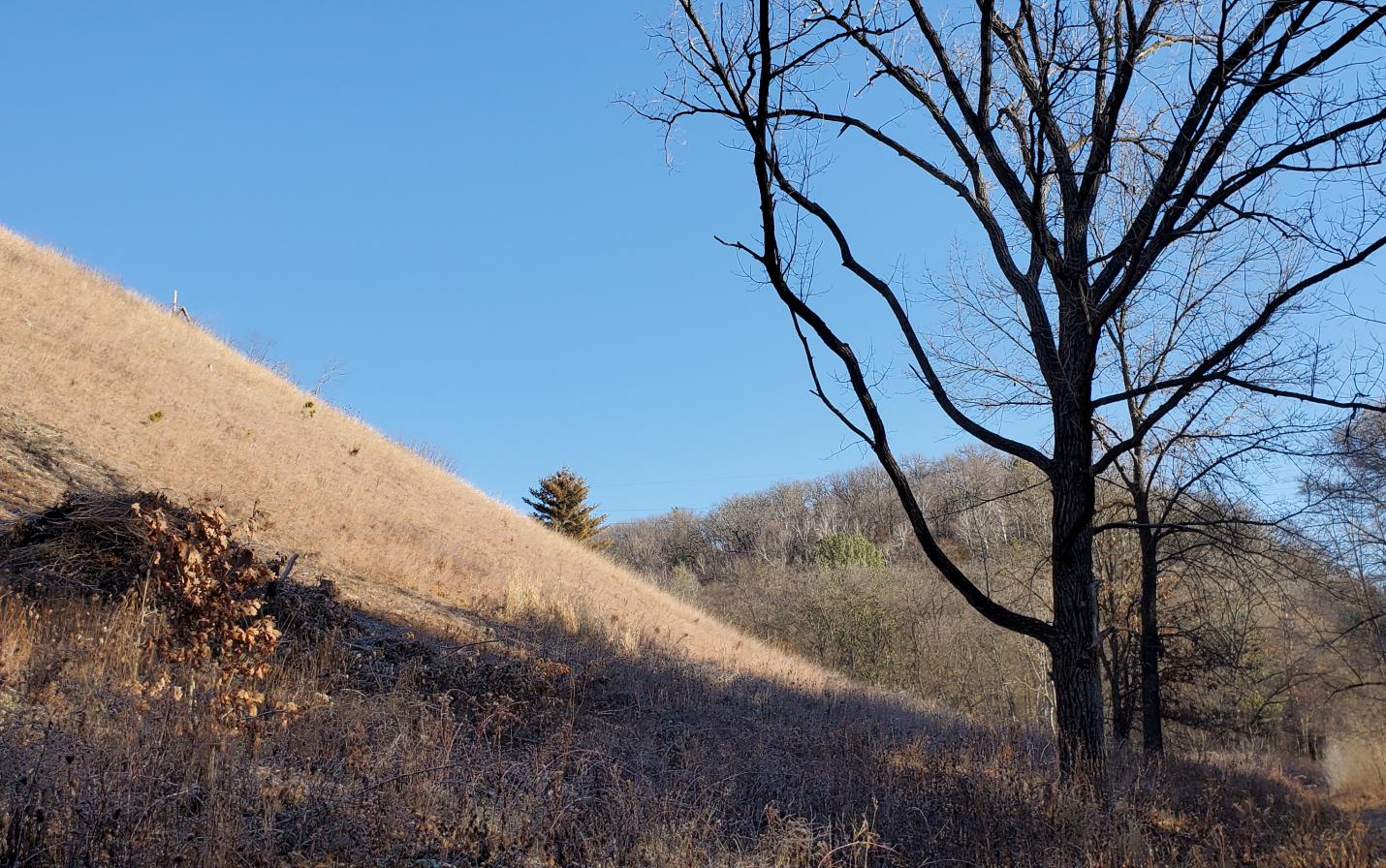 In 1853, as the story goes, an editor of the Milwaukee Sentinel, travelling with a team of railroad executives, admired an oak forest along the Wisconsin River and, trying out his Italian, called it the “belle bosc,” or beautiful woods.  Three years later the town of Boscobel, Wisconsin, was platted.

Boscobel Bluffs, a 389-acre Wisconsin State Natural Area owned by Mississippi Valley Conservancy (MVC), preserves a slice of that beautiful woods for today’s and future generations. The tract boasts a progression of steep hillside prairie, oak forest, pine plantings, and upland prairie along its 1½-mile trail that climbs 400 feet from base to plateau, with several out-and-back spurs.

Dianne and I squeezed in a late autumn hike at Boscobel Bluffs between deer hunting season and December’s first snowfall. The sun was trying its best to melt a thick frost as we started the upward trek. Looming above us from the outset were a succession of three steep-sided natural prairies, more commonly known as goat prairies.

MVC Conservation Director Abbie Church explains that the goat prairies are in the process of being restored. Red cedar stumps are a reminder of the fate that goat prairies suffer when they are not periodically cleared by wildfire or prescribed burns and their dry, rocky soils are overtaken by cedars. By cutting the cedars, says Church, “we are bringing sunlight back onto the ground” to restore the health of the natural grasses and its prairie habitat.

The transition from prairie into deep forest used to be more gradual, says Church, and Dianne and I note the instantaneous shift into a thick, oak forest. In a telephone conversation prior to our hike, Church told us to note the shape of the oaks in the deep forest, with their lateral, spreading branches. This indicates a past oak savanna habitat that would have harbored occasional oaks with prairie grass at their feet. In the absence of prairie fire, “the forest has filled in with scrub trees.” Oak savanna restoration lies ahead on Church’s list of land management.

The pine planting is up next—literally up, with tall, straight trunks stretching skyward, nearly branchless until the canopy. Here the forest floor is clean, devoid of scrub trees and bushes, and underlain by a soft mat of pine needles in a sandy soil halfway up the climb.

Yellow sand gives way to a soft, brown loess as the oak forest re-emerges at the plateau. Although Boscobel Bluffs lies at the edge of the unglaciated Driftless Area, the last glaciers halted not many miles away, and loess deposits resulted when prevailing winds blew sand, dust, and pulverized soil off the ice and dropped it on the rock outcrops lining the southern shore of the Wisconsin River. The fine loess, mixed with the decay of thousands of years’ worth of oak leaves, feels like talcum powder when rolled between one’s fingers.

Upland prairies pop out here and there along the trail.  These grow from wetter soils than the goat prairies, though they’re far from being marshes.  Again, Church had instructed us what to look for in a late fall hike: “Look for the colors. Native prairies have much deeper hues than non-native bromes. See the reds, burgundies, and golden hues in the dried prairie grasses.”

Preservation and ecological management of lands such as Boscobel Bluffs are at the root of the Conservancy’s mission.  The organization took root in 1997 in La Crosse, Wisconsin, when blufftop development took off and local citizens formed a non-profit land trust to try save what they could. Since then, the organization has grown to protect 21,000 acres in nine southwest Wisconsin counties.  Five thousand acres, such as the Boscobel Bluffs, are open to the public, while the remainder lie in conservation easements on private property.

Church has been with the Conservancy since 2007, and has been associated with Boscobel Bluffs “from the first phone call till now,” as she continues to be involved in the area’s land management. Boscobel Bluffs became a Conservancy property in 2013 when the family of late landowner Dr. J.R. McNamee contacted them with a desire to preserve the land. A DNR stewardship grant was used to purchase the property.

“This area is ecologically rich,” Church says, referring to the multiple habitats present in a relatively small space. This is important in an era of climate change as the variety of habitat means that “diverse species can fill niche areas where they will best thrive.” The habitat is buffered, too, by adjacent private property likewise protected by the local Prairie Enthusiasts chapter.

Most of the property has never been farmed, Church points out, “which is one of the reasons for its high quality habitat.” The Bluff property has remained largely untouched since before Euro-American settlement. “Everything that is there was there on its own or has been re-seeded from its own seedbank.”

As Conservation Director, Church works on private conservation easements, land acquisitions, grant applications and land management. While all aspects of her job are important to the Conservancy, one senses her particular enthusiasm for caretaking on the properties themselves. “Last week was fall burn season!” she exclaimed during our call.

Much of the land management is assisted by volunteers, who help with selective tree thinning, invasive species removal, and prairie restoration.  Oftentimes day-long programs are scheduled for volunteers to come together, work, socialize, and enjoy the beauty of nature.

These “beautiful woods,” prairies, and towering bluffs of Boscobel Bluffs, having been spared from future development, appear massive and indestructible. But humans have so altered the environment that simply leaving the land alone will not preserve it in its natural state. Stewards such as the Mississippi Valley Conservancy and its volunteers are needed to mimic natural forces that have been altered or destroyed.

Kevin Koch is an English professor at Loras College in Dubuque with a specialty in nature writing. To read more of his writings about nature, visit his blog.