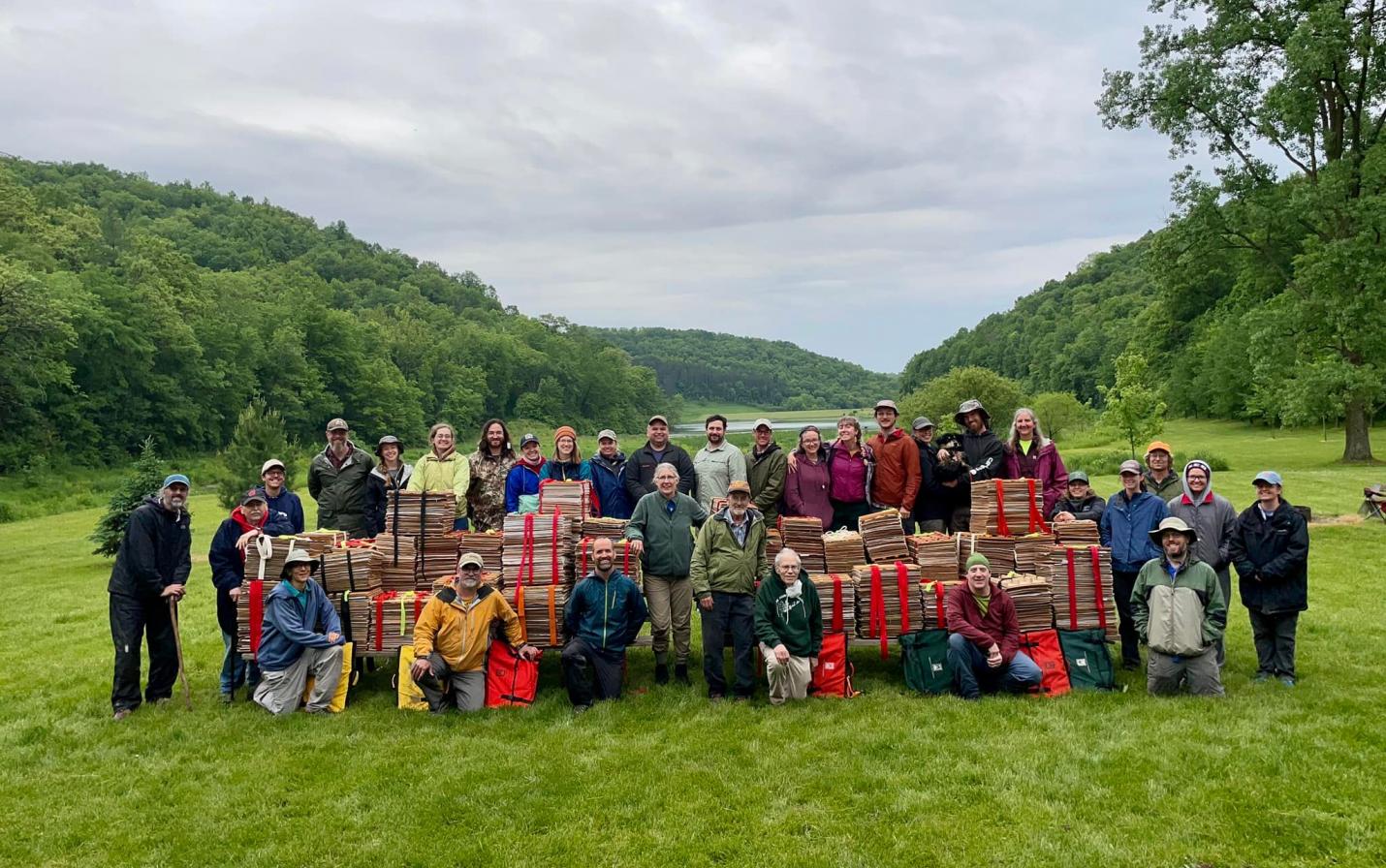 This past weekend more than fifty botanical experts from across Wisconsin and our neighboring states gathered at Sidie Hollow County Park just west of Viroqua. The Wisconsin State Herbarium and the Botanical Club of Wisconsin hosted their 2022 Wisconsin Botanical Foray on June 3rd & 4th with a focus on the Driftless Area of southwest Wisconsin. Mary Ann Feist, Herbarium Curator of the Wisconsin State Herbarium coordinated the event and reached out to Mississippi Valley Conservancy this past spring to ask about collecting samples at some of the Conservancy’s nature preserves. The group also collected at several DNR State Natural Areas, at the Kickapoo Valley Reserve, and at some privately-owned properties.

Everyone gathered Friday morning to get their team assignments, instructions, and maps for the day. The botanical foray has been moving around to different regions of Wisconsin to collect herbarium specimens that contribute to the scientific knowledge about the diversity and abundance of plant species and their associated natural communities. Some areas, such as the Driftless Area have not been botanically researched as extensively as other areas of the state.

This was scientific research, and as such, there is a protocol that each group followed. The sampling process consisted of a team of 4-5 people that had an expert botanist team leader. The groups visited the Conservancy’s Tunnelville Cliffs and Sugar Creek Bluff State Natural Areas, as well as the newly acquired Plum Creek Conservation Area. Once at their site, the groups hiked into an areas that represent diverse natural communities on the properties and set up sampling sites.

The sampling consisted of the team leader taking notes and numbering each sample as it came in. Someone else was responsible for placing the sample between two pieces of newspaper with a corresponding number and pressing them together one after another. The rest of the group were the collectors and collected only plant samples that showed any sign of flowering or seed present.

The purpose of the collecting is to observe two samples of each plant that is present, including all common and invasive species, as well as the rare and unique. So, garlic mustard and dandelion were collected alongside wild strawberry and jack-in-the-pulpit. The exciting thing is that these forays offer the opportunity for expert botanists to key out some types of plants that don’t usually get identified. An example is the sedges or native cool-season grasses found in almost every habitat. Sedges have three sides to their stems, as the phrase goes “sedges have edges” however teasing out all the diversity of sedges is not something every ecologist is an expert on. Several groups had sedge experts, which will add a rich diversity to the Conservancy's species lists for our nature preserves. Having experts key out the sedges at the Conservancy’s new Plum Creek Conservation Area will assist tremendously with our long-term planning management planning for the site.

After sampling 2-3 different habitat types, the groups returned to Sidie Hollow with their samples. Once back to the shelter, each sample had to be transferred to a plant press. Which meant going through each sample collected and placing a piece of cardboard and a blotting sheet between each sample. The samples were then strapped down to compress the samples into plant press stacks to be dried this summer. According to Mary Ann Feist, the group collected nearly 1,200 vascular specimens, including over 40 bryophytes, or mosses, that were collected primarily at the Conservancy’s Tunnelville Cliffs State Natural Area.

This gathering of botanical experts provides an opportunity to obtain expert botanical inventories that will not only be curated at the UW Herbarium but will provide a much more thorough and current scientific representation of the Driftless Area’s botanical diversity. This information is will be very useful, especially for the Conservancy’s land management team as they plan land management activities.

This winter, the samples will be verified and processed to be mounted and prepared as UW Herbarium specimens. I look forward to receiving the final results of the foray sometime next year, which will contribute a wealth of knowledge on the biodiversity of the Conservancy’s nature preserves.