The cost of releasing pets and plants into nature 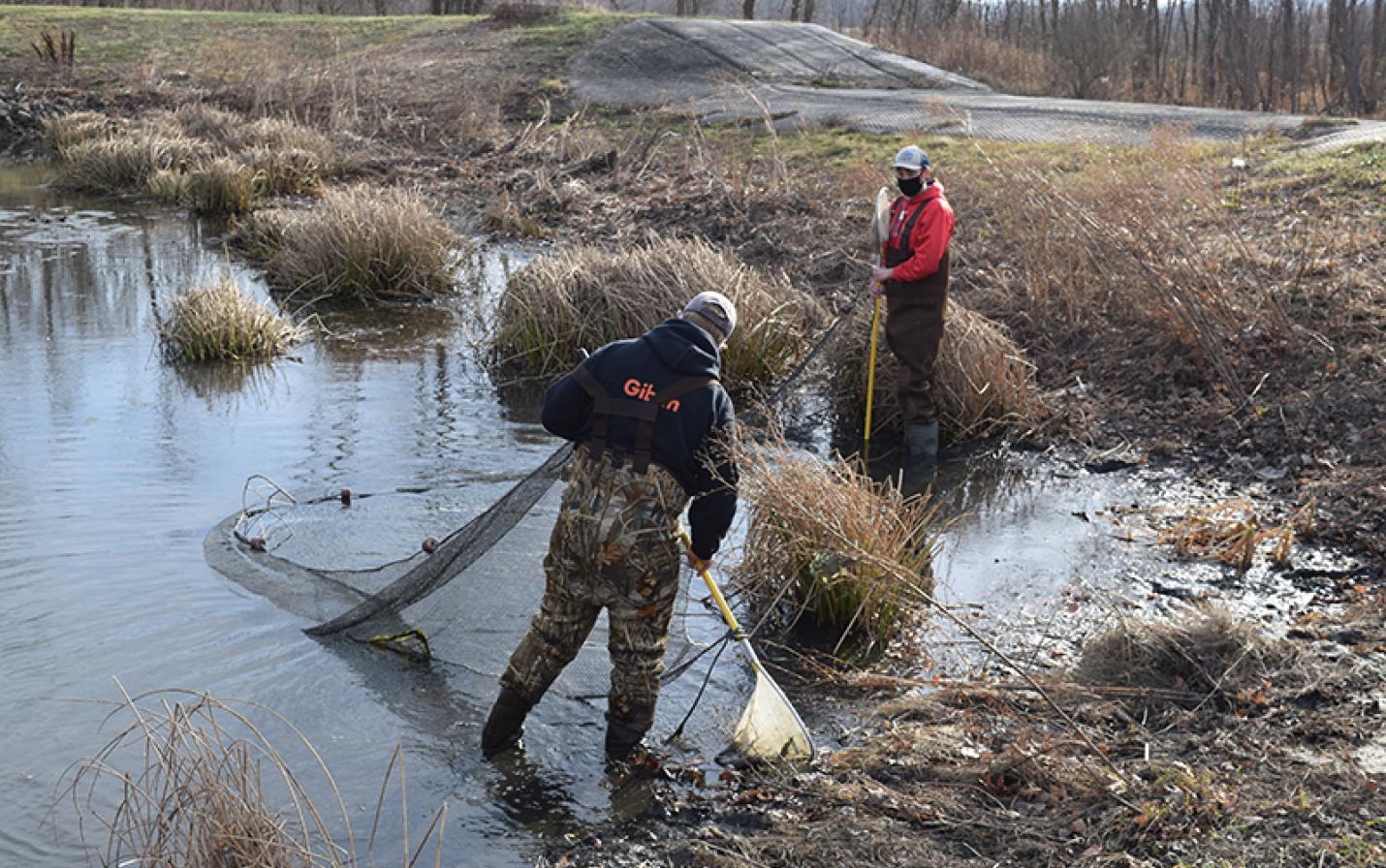 While collecting water samples near the pond behind Stoney Creek Hotel, DNR Water Quality Specialist Jeremy King saw a bright orange fish and knew right away that it was a non-native goldfish. Looking around, King found several more goldfish and confirmed that there was a population here.

King was collecting these samples for a year-long road salt study that the DNR's Mississippi River Water Resources Management Team is working on. The team is measuring the amount of chloride and sodium in surface waters throughout La Crosse County, and the pond behind Stoney Creek Hotel is one of twenty study sites. Located in the La Crosse River Conservancy, this pond flows directly into the La Crosse River and therefore has an impact on the local rivers.

Last week, King and Shawn Giblin, the DNR’s Mississippi River Water Resources Management Specialist, returned to the pond to capture the goldfish and were joined by Siena Muehlfeld from Mississippi Valley Conservancy. They surveyed the pond to identify where the goldfish were, and to decide on the best method for removing them.

The goldfish were all congregated together in the deepest most stagnant corner of the pond, so they decided that using a seine net to capture them was the best method. They used the seine to round up all the goldfish, and dip nets to transfer them to a bucket. The bottom edge of the seine has a leadline to weigh it down, and the top edge is lined with floats. The net requires 2 people to operate. A total of seven goldfish were removed from the pond.

Giblin believes that all of the captured goldfish were pets that somebody released. There is no evidence that the goldfish had reproduced in the pond. After capturing and removing the population, the team surveyed the pond again to ensure that all of the invasive fish were captured. "This could have become a much bigger problem if we didn't jump on it right away. It's always best to be cautious and take care of these populations [of aquatic invasive species] as soon as they are identified," he said.

The pond connects to the La Crosse River, so it was important for the team to remove the goldfish population as early as possible. Removing the goldfish was the only way to ensure that the population did not reproduce and increase their population, or expand into the La Crosse and Mississippi Rivers where they could have had a much bigger impact on our water resources.

Invasive aquatic species such as goldfish disrupt the balance of natural communities, deplete native resources, and may have a negative effect on water quality. At least once per year, the Water Resources Management Team must spend time and funding resources to remove a population of an aquatic invasive species that someone has released. Other examples of such a species are the common water hyacinth (Eichhornia crassipes) and water lettuce (Pistia stratiotes), which the team has removed on several occasions from the Mississippi River and connecting waterways in recent years.

Educating people on the importance of not releasing their pets or aquarium plants into the wild is the most important step in protecting our critical water resources and preventing these negative impacts in the future.

The problem of released pets and discarded plants as invasive species is not new, as documented in the following articles.