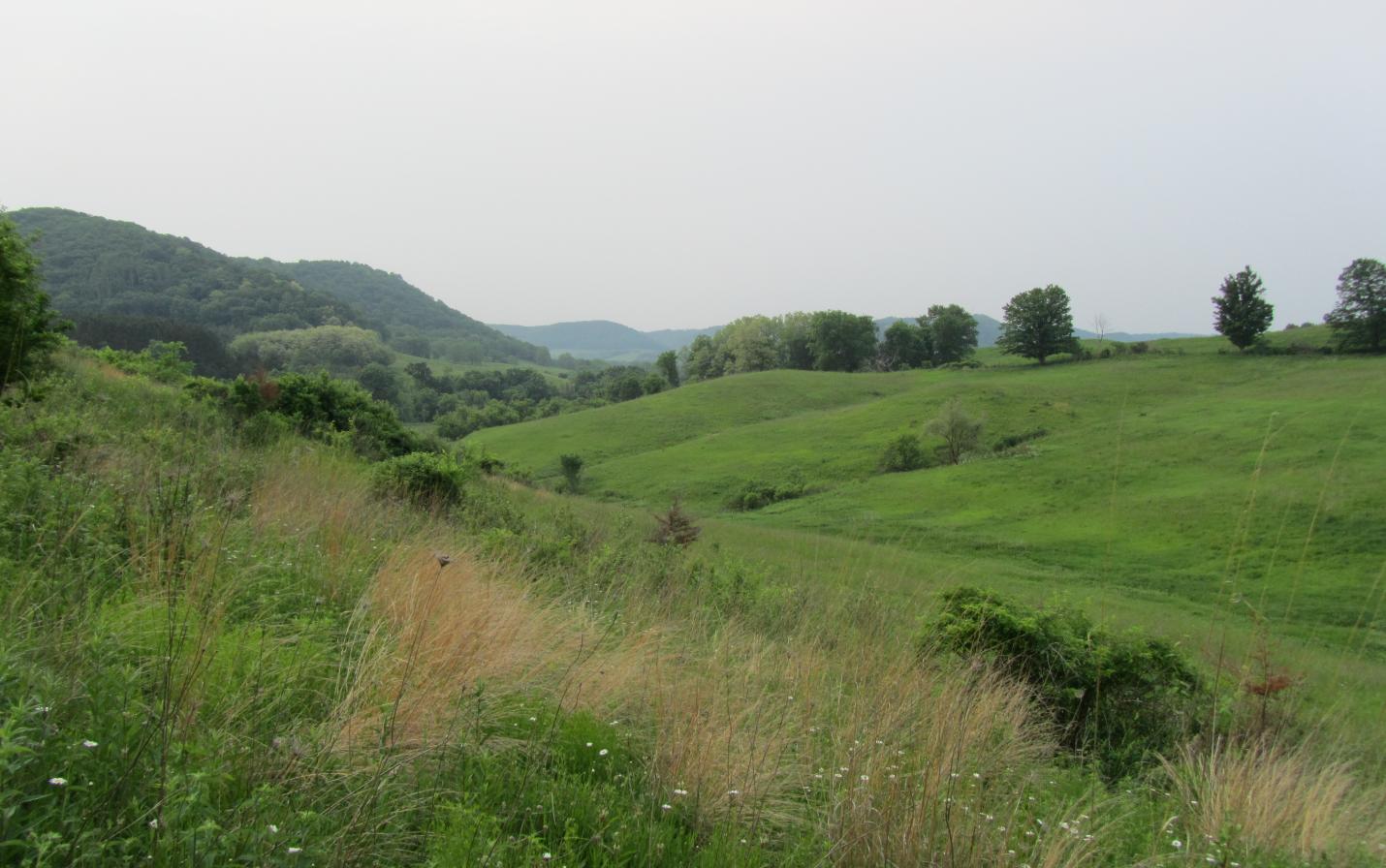 When Conservancy Land Manager Levi Plath and his crew of interns return from a day in the field, you can see through the dirt and sweat that they are healthy, exhausted, and satisfied with their accomplishments of the day. As a team, they’ve made a dent in a massive prioritized restoration plan, and the interns are getting first-hand knowledge of the value they will bring to the world in their conservation careers. Now in its fifth year, our grant-funded paid summer internship program is giving aspiring conservationists the opportunity to work with and learn from Levi and our many conservation partners.

Protecting land from development means protecting our air, water, and food sources for the future. And legal protection is only the first step. To deliver the many ecological services it once did, the land needs to be managed, maintained, and restored. This is where Levi and the intern crew come in. In the case of Tunnelville Cliffs, a portion of which is designated as a State Natural Area in Vernon County, restoration of the land means it can return to its full potential as natural provider of erosion prevention, carbon sequestration, water quality protection, and wildlife habitat.

Tunnelville Cliffs is a 1,271-acre nature preserve on the east fork of the Kickapoo River. The land is adjacent to several private properties that are also protected by the Conservancy. Together they form a stretch of 2,278 contiguous acres protected on the Kickapoo River—a total area larger than 43 of Wisconsin’s state parks. Among its many features are east-facing Cambrian sandstone cliffs with seepages at the base, the Kickapoo River and an associated wetland, dry prairie remnants, wooded ridges, and a hilltop with a fantastic overlook of the valley. Some of the plants and animals that can be seen on the property include common milkweed, evening primrose, false Solomon’s seal, Jack-in-the-pulpit, purple aster, blue-winged warbler, cerulean warbler, Henslow’s sparrow (state threatened), least flycatcher, sedge wren, and eastern milk snake. 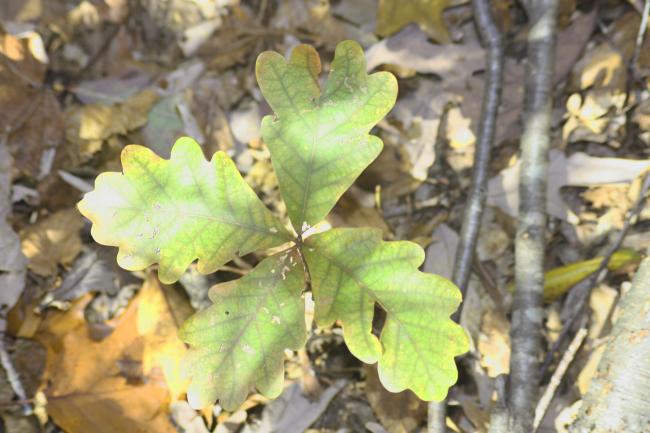 To grow strong and sustain hundreds of species as its elders do, a young oak needs open space and sunlight that are often robbed by invasive species.

One of the persistent threats to the Conservancy’s nine-county service area (including Tunnelville Cliffs) is the lack of oak regeneration – too much shade prevents oak seedlings from germinating or the seedlings cannot compete with faster-growing maple, ironwood, aspen or invasive honeysuckle, autumn olive and buckthorn. Oak is especially valuable for wildlife, supporting over 500 different species of butterflies and moths. Migrating warblers follow the oak flowering each spring as they move north, feeding on insect populations. Acorns provide food for whitetail deer, wild turkeys and other wildlife, and the trees themselves provide shelter and numerous other invisible benefits. They hold soils in place, absorb run-off from heavy rain events, trap carbon in the soils, release oxygen into the air, and support a tremendous diversity of wildlife. 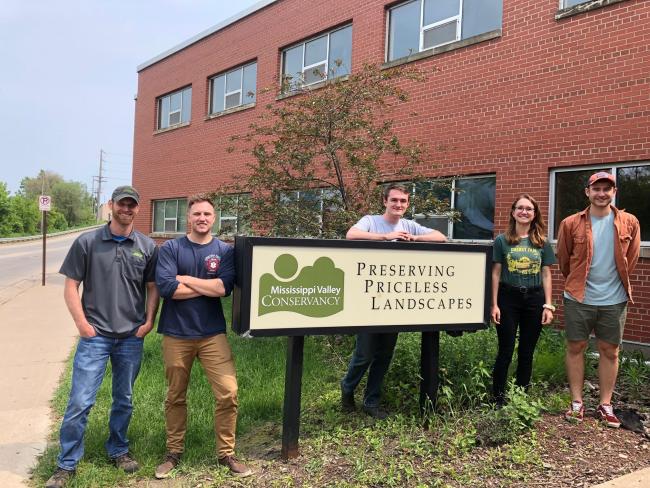 Pictured above are Levi and the 2019 habitat restoration interns. From left to right are Land Manager Levi Plath and interns William Dykstra, Daniel Meyers, Michelle Homann, and Frederick Ragan.

In recent years, thanks in great part to Levi and the summer intern crews, much has been accomplished to restore native habitats at Tunnelville Cliffs. Roughly 45 acres of underbrush – consisting of sumac, prickly ash, autumn olive, honeysuckle, ironwood, and maple – have been cleared from the oak woodlands and savannas to allow enough sunlight for natural oak regeneration. Approximately 90 acres of new prairie have been planted and maintained with intermittent prescribed burns and mowing. It’s slow and painstaking work, but the changes are increasingly visible and the native species, including gray coneflower, big bluestem, little bluestem, prairie dropseed, and flowering spurge, are taking hold of the land that was once theirs. They help provide habitat for pollinators and hold open the woodlands for future generations of oak and hickory trees. According to Levi, many of the native prairie species that weren’t part of the planting have resurged, thanks to the prescribed burns and ongoing management of the property. 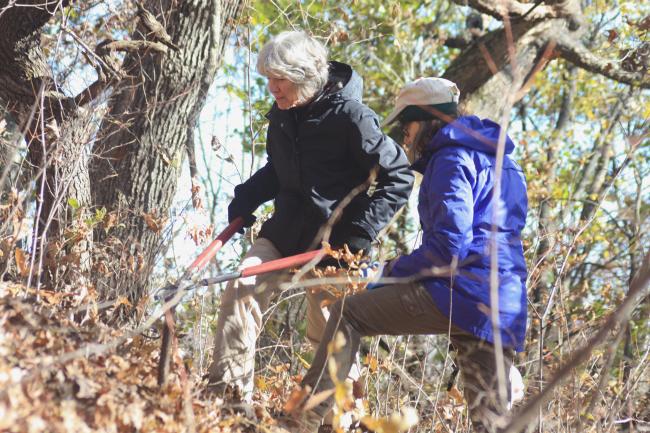 "For the Wild" volunteers clearing invasive species at Tunnelville Cliffs.

Volunteers are making a difference

Volunteers have also played a role in restoring habitat at Tunnelville Cliffs. The work is ongoing, and anyone can sign up to be notified of volunteer days when Levi and the crew will be at Tunnelville Cliffs and other Conservancy-protected nature preserves. You, too, can have the healthy glow of the land restoration interns!

Everyone benefits from the crew’s land restoration work and its role in sustaining wildlife and natural communities and protecting the land’s resilience to climate change.

The public can also enjoy direct connection with the land at Tunnelville Cliffs. Recreational activities allowed on the property include hiking, birding, nature photography, canoeing, kayaking, snowshoeing, and cross-country skiing. Hunting and fishing are also allowed, according to state and local ordinances. Activities NOT allowed on the property include dog-walking, seed collection, taking flora or fauna (berry-picking and mushroom-picking are allowed), motorized vehicles, camping and campfires.

Tunnelville Cliffs was recently featured as a “hike-of-the month” in our Trail Trek Challenge program. If you’ve never visited the property, you might enjoy planning a day trip with suggestions from the author. For more information about Tunnelville Cliffs and twenty more nature preserves protected by Mississippi Valley Conservancy, visit the Nature Preserves page on our website.

Before and after example of understory clearing at Tunnelville Cliffs