“Ridge People” Create Refuge for Themselves and for Wildlife 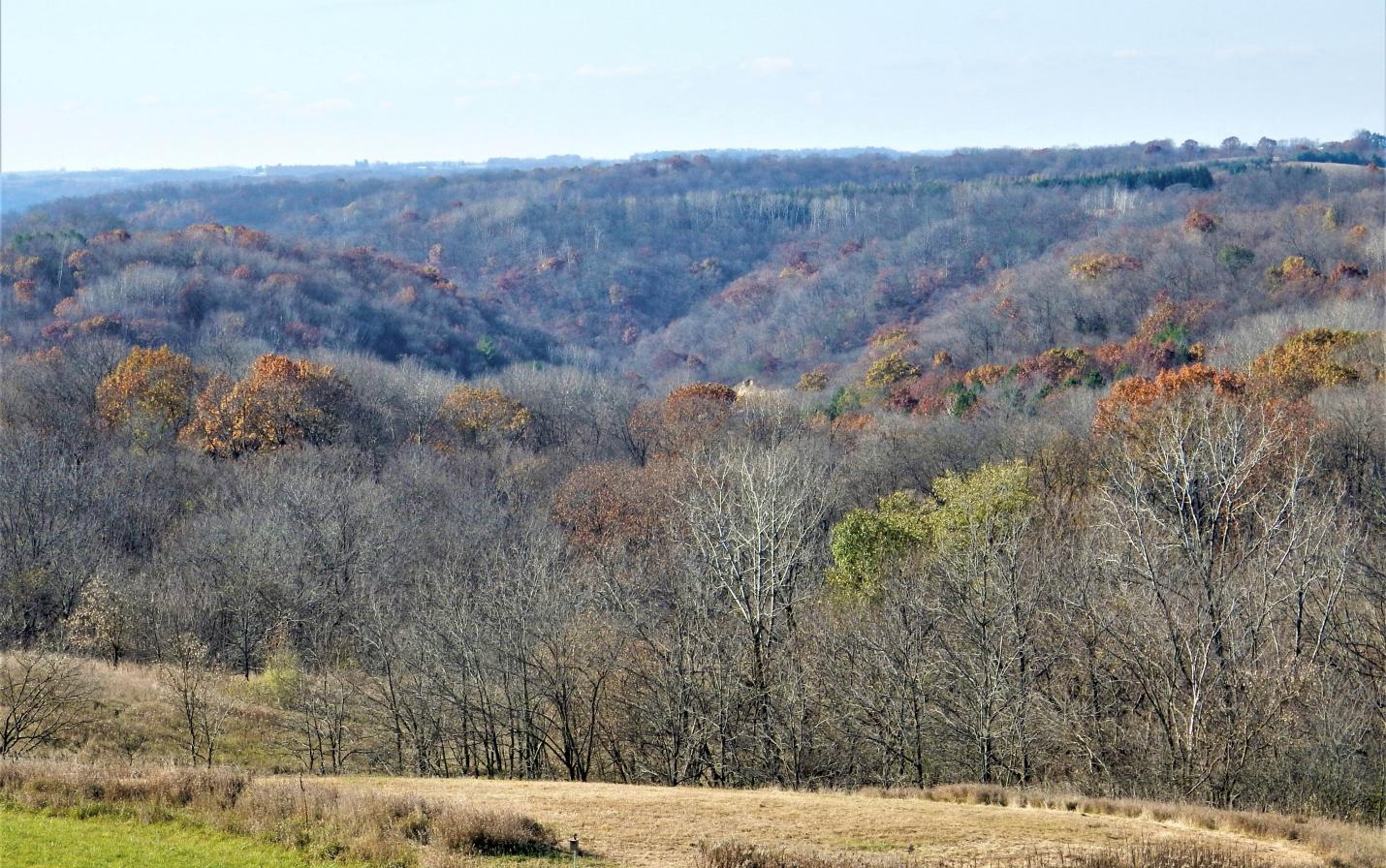 READSTOWN, WI – Land ownership offers many learning opportunities, and that was certainly the case for Bruce Harvey when he and his wife chose to purchase a 97-acre property in Vernon County in 2006. Now celebrating early results of their efforts to conserve their land, with its ridge-top farm fields and wildlife habitat, the Milwaukee-based couple has signed an agreement with Mississippi Valley Conservancy to permanently protect the land from subdivision and development.

Bruce’s wife, Nancy, said they didn’t fully understand the ecological significance of the land at the time of their purchase. Stunned by the beauty of the ridgetop land, she said their realtor quickly identified them as “ridge people,” and they’ve been comfortable with the label ever since. After acquiring the land, Bruce and Nancy immersed themselves in workshops with local conservation groups, including Mississippi Valley Conservancy, and they learned that their land is within two areas designated as ecologically significant – one is the Conservancy’s “Kickapoo River Priority Area” and the other is the Wisconsin Wildlife Action Plan’s “Kickapoo Conservation Opportunity Area” which is designated as “of Continental Ecological Significance.”

By engaging the Conservancy in the process of protecting their land, Bruce and Nancy have learned a great deal about the features of their land that provide crucial habitat for wildlife, such as the eastern meadowlark, considered a “Species of Greatest Conservation Need” in Wisconsin due to habitat loss and falling population numbers. The remnant prairie and hayfields provide a diversity of native wildflowers, grasses, and sedges – all are essential for declining pollinator and grassland-nesting bird populations.

On their land ownership learning journey, Bruce and Nancy have also discovered many ways to protect their investment.

In addition to creating a refuge for themselves, they have done the same for birds with bird houses and feeders, for butterflies and other pollinators with plantings through the USDA’s Environmental Quality Incentives Program (EQIP), and for other wildlife with hazelnut shrubs that provide food. They are also nurturing their sugar maples and have enrolled their wooded land under Wisconsin’s Managed Forest Law program (MFL).

Realizing the vastness of their 97 acres, Bruce and Nancy chose to continue leasing some of the ridgetop land to the man who had been farming it, but they soon saw the effect that his farming practices were having on their land. They saw lots of exposed soil that had been chemically treated and was vulnerable to erosion. They chose to find a farmer with a more sustainable approach, and they were happy to find one who wanted to farm the land organically. To help make it possible for him, they reduced the cost of the lease for the three years of transition time required before the land qualified as organic. Today, another organic farmer is leasing the land and using a variety of soil conservation practices, including no-till, contour strips, and grass waterways “It’s been a cooperative effort,” Bruce said, “and it’s satisfying to know that these practices are not only protecting the soil but are also benefitting the farmer with the higher market value of organically produced crops.”

“When landowners give such care to the land and then go the extra mile to protect it for the future, they are making a generous gift to the broader community for the benefit of us all,” said Carol Abrahamzon, executive director at the Conservancy. “Everyone wins when the land is allowed to go on serving people and wildlife as it has for thousands of years,” she said.

Perhaps most satisfying of all their experiences on the land has been sharing it with their visiting grandchildren. The children love to explore and draw maps of trails in the woods, including one trail that Bruce created with the help of an expert who helped him design it in a way that would resist erosion. The trail terminates at a huge oak that the children have named “the grandfather oak.”

With every visit, Bruce and Nancy find great joy in walking the paths and trails on the land they share with woodpeckers, black-capped chickadees and white-breasted nuthatches. In summer, they’ve seen indigo bunting, scarlet tanager, and they’ve heard the call of the black-billed cuckoo. They’ll continue to love and care for the land for as long as it’s practical for them to do so. Looking beyond that, they’re happy knowing they will pass the possibility for that joy on into the future.