Solar energy and its place on the land 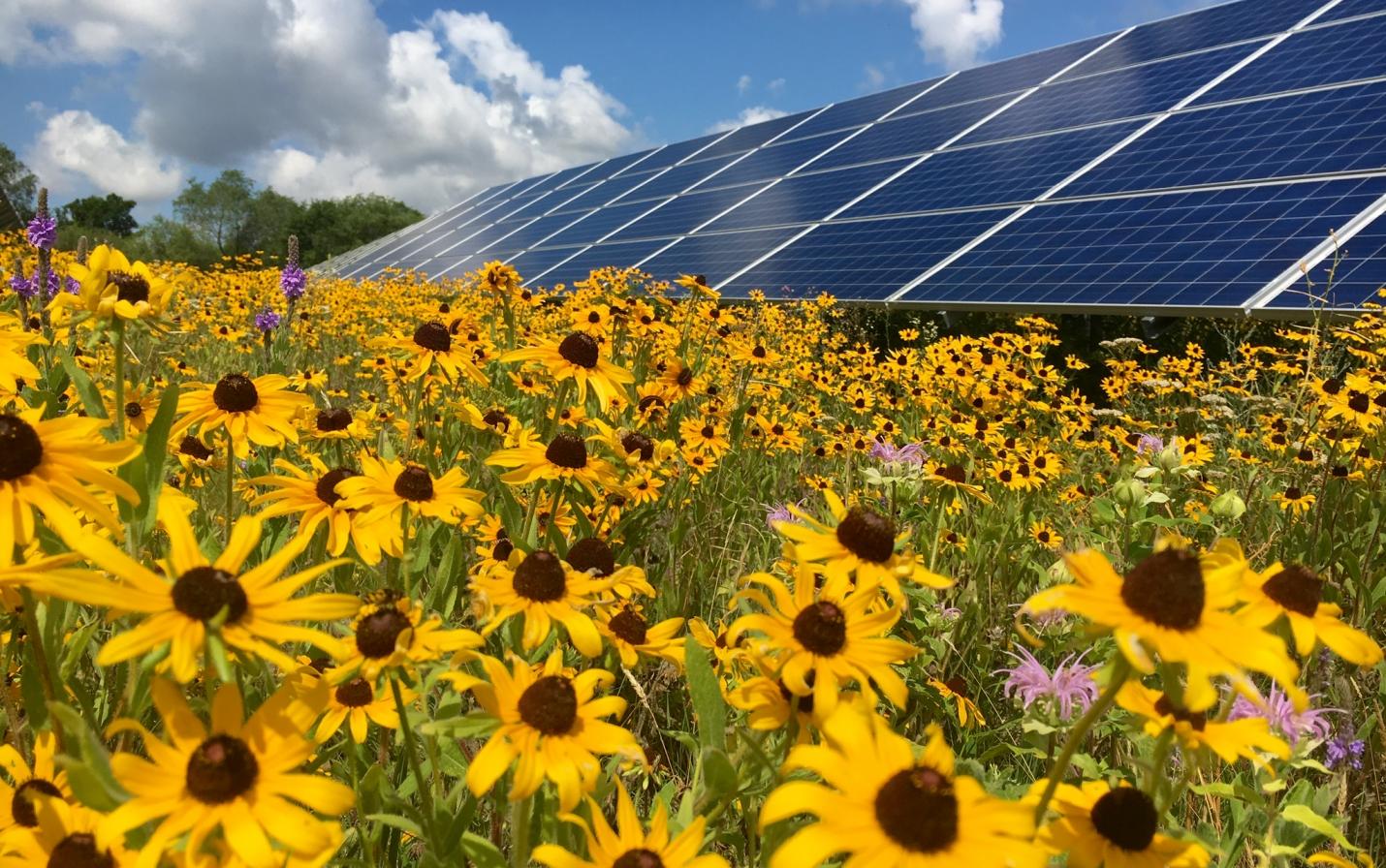 President Biden’s climate and health bill, the Inflation Reduction Act, which he just signed into law, will greatly increase support for the role of land conservation in mitigating the effects of climate change. For example, incentives are offered to support conservation practices to bolster the ability of conserved working lands to capture and store carbon. Also in the mix of incentives are tax credits for solar power installations that capture renewable energy from the sun. Photovoltaic solar energy has been under study in recent years as a complement to agriculture. In this story, we look at the appeal of “dual use” of land as well as the early adoption of solar energy by landowners who have conservation easements on their land with Mississippi Valley Conservancy.

In a world beset with climate change and its attendant fires and floods, the need for solar energy is immense — vital if the world is to quit burning fossil fuels, the primary cause of the climate crisis.

The International Energy Agency calls for 630 gigawatts of new solar power and 390 gigawatts of new wind power to be added each year by 2030 in order for the world to meet its carbon dioxide reduction goals. For solar power, that amounts to building the world’s largest current solar farm nearly every day.

The trick, for those of us in the business of land conservation, is to make a contribution to that effort without compromising our attendant missions of protecting biodiversity and working lands that produce the food we need. There’s a growing body of research and practical application that offers hope this can happen using agrivoltaics, the practice of combining agriculture and solar energy collection — a dual use of the land. The University of Wisconsin-Madison is about to join the effort to test this approach.

The University of Massachusetts at Amherst pioneered the concept; they’ve been at it since 2010 and now offer Extension advice predicting that the combined value of crops and electricity produced will be equal to or higher than single use of the land for production of crops or electricity alone. So the land that produces energy can add to its already substantial role of storing carbon in the soil, crops, prairies, and forests to advance a cooler climate.

A number of landowners with conservation easements have already incorporated solar energy systems into their property building zones.

Land trusts nationwide are studying how best to write future easements that would permit solar on agricultural land and still protect the conservation values of the land as well as complying with the requirements of the IRS and standards and practices of the Land Trust Alliance.

The AgriSolar Clearinghouse notes that by 2030, solar installations are expected to cover more than 3 million acres of land in the United States. “Today, most of those installations sit on top of stripped, single-use land. Expanding agrivoltaics on solar-appropriate lands will allow agricultural and solar producers to maximize the use of land, increasing pollinator habitat, diversifying ecosystem services, and increasing revenue.”

The research projects seek answers about which crops and growing methods best complement the solar installations. So far, grazing sheep under raised solar panels has attracted most attention for livestock producers, although a University of Minnesota Morris campus project has dairy cows grazing under panels. Vegetable and fruit crops grown under panels have shown promise and community solar pollinator gardens that feed bees are part of projects in Minnesota by SunShare and Xcel.

Adding to the research effort, the University of Wisconsin-Madison recently announced a partnership with Alliant Energy on university-owned land just west of Lake Kegonsa. The university will lease to the utility a 15-acre parcel of land at the 280-acre research campus. Alliant will design, construct, operate, and maintain the 2.25-megawatt solar and agriculture research project. “It gives our students and faculty the opportunity to study soil, water, plant, and animal interactions when a solar array is integrated with agricultural land, which will help our understanding of the costs and benefits associated with siting solar energy in Wisconsin and beyond,” a UW news release said. The project will have the capacity at full production to power some 450 homes.

Thanks to improving technology – such as bifacial panels that are able to harvest sunlight on both sides – solar farms are already producing more power on less land. A recent study by the U.S. Department of Energy’s Lawrence Berkeley National Laboratory finds that the average power density, or peak output per acre, of utility-scale plants increased by as much as 52 percent in the past decade. Energy density, or total megawatt hours generated per acre over the course of a year, rose by up to one-third. Using less land by incorporating crops with solar may soften some of the resistance to solar siting that has emerged due to large-scale solar farms.

Using land for both solar photovoltaic power and agricultural production could provide 20 percent of total electricity generation in the United States with an investment of less than 1 percent of the annual US budget, according to Oregon State University researchers. The land involved would amount to only 1 percent of total US agriculture land, the researchers said. Chad Higgins, the OSU professor who was senior author of papers in journals Sustainability and Nature on ag and solar research, said: “Agrivoltaics provide a rare chance for true synergy: more food, more energy, lower water demand, lower carbon emissions, and more prosperous rural communities.”

Most of the Conservancy’s land conservation easements permit solar arrays only in property building zones. Land trusts nationwide are studying how best to write future easements that would permit solar on ag land and while still protecting the conservation values of the agricultural lands and complying with the requirements of the IRS and standards and practices of the Land Trust Alliance.

In support of the Conservancy’s Climate Action Plan, staff and board members continue to evaluate how landowners could incorporate more solar energy production as part of their conservation commitment.